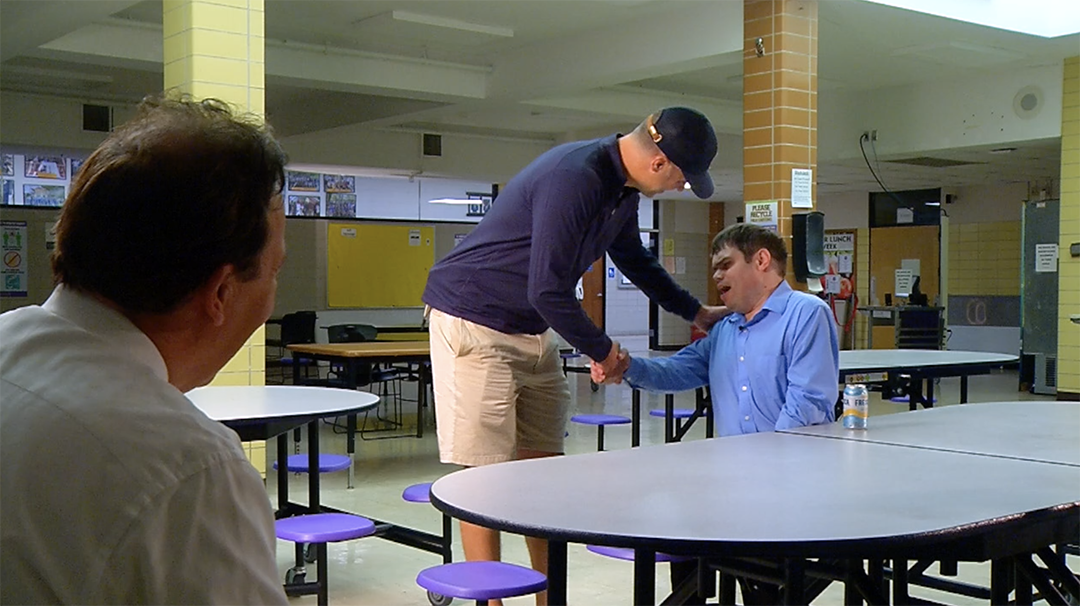 No One Sits Solo– The Story of Joe Mauer & Mike Hally

Thumbs Up recently lauched a new program called No One Sits Solo. The program addresses the issue of kids eating alone in the lunchroom and finding ways for kids to invite others to their lunch table or going to sit with someone who might be eating alone. Thumbs Up was recently featured on KSTP-TV, Minnesota Live and in the Elk River Star Newspaper.

“When Joe Mauer, six-time All Star for the Minnesota Twins and 2009 American League Most Valuable Player (MVP), was going to Cretin-Derham Hall High School in St. Paul, Minnesota, in the late 1990’s, he was the big man on Campus.” (Schmit, Joe. (2014). Silent Impact. Wise Ink, Inc.. https://joeschmit.com/)

“Joe Mauer was one of the most talented high school athletes in Minnesota history. He was offered a full-ride scholarship to play quarterback at Florida State, he was an All-State guard in basketball, and he was the best high school baseball player in the country. Drafted by the Minnesota Twins in 2011, Joe Mauer is the only catcher in MLB history to win three batting titles.” (Silent Impact, page 7)

In Joe’s senior year at Cretin-Derham Hall High School, Joe decided to invite one of his fellow classmates to sit at his lunch table. That classmate, Mike Hally, just happened to be blind. Joe would walk Mike to the lunchroom, through the lunch line and also help wipe crumbs off of his face. Mike became “one of the guys” at the cool table. Joe Mauer’s friends also began taking turns walking him through the lunch line and to his next class.

“Mike was a kid who could have been ignored or shunned because of his disability, but Joe made him one of the cool kids. Imagine the impact it had on Joe’s friends and other students at the high school. The ripple effect of Joe’s actions in high school is even more impactful now, given his rise to athletic fame. We make our biggest impressions when we are not trying to be impressive.”

Now over a decade later, the impact of Joe Mauer inviting Mike Hally to his lunch room table is still being felt today. “The act broke down barriers. It gave me confidence to meet other people. Joe taking me to lunch was a sign to all the other athletes that it was okay to be my friend.” Mike recalled. (Silent Impact, page 9)

In the words of Joe Schmit, “Bullies are forgotten. Kindness can become legendary. You never know when someone at your school needs you to acknowledge them, say hi to them. When in doubt, do the right thing.”

The No One Sits Solo Grant was funded in part by the Sherburne County Area United Way.

Click here to watch the six-minute video that was produced to help catapult the program into schools across Minnesota!

For inquiries or to learn more about the grant, please email info@thumbsupformentalhealth.org

Stay up to date on all our events and happenings!